European summer festival and individual tour dates have been announced for shows in the UK, Germany, Austria, Ireland, Sweden, France and Italy, including some of the larger European festivals such as Download Festival, Hellfest, Rock The Ring and Isle of Wight Festival. More European dates will be announced soon so be sure to also follow Billy Idol on Facebook and Twitter for updates! 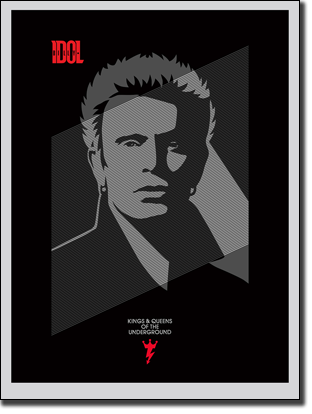 Message from the artist:

“I have been fortunate to work with Billy Idol on several creative projects including his “Devil’s Playground” album package and his “Idolize Yourself” greatest hits package. Billy invited me once again to help with the art for his most recent album “Kings & Queens of the Underground.” Billy played the record for me and I was impressed with the stylistic range and especially loved the songs “Can’t Break Me Down,” “Save Me Now,” and “Whiskey and Pills.” I asked my friend, photographer Michael Muller (with whom I’d collaborated on the “Walk the Line” movie poster), to shoot the portraits for the package and he did a great job. I’m happy with the way the album package turned out, and as part of the project I was able to make an illustration of Billy based on one of Michael’s portraits, which I incorporated into this poster to accompany the “Kings & Queens of the Underground” album and tour. I’m very happy with how the poster turned out. On a side note, the “Kings & Queens of the Underground” album is heavily autobiographical because Billy was simultaneously working on his autobiography entitled “Dancing With Myself.” I’ve had the privilege of hearing amazing stories from Billy about his days in the London punk scene seeing the Sex Pistols, forming Generation X, and then moving to NY to go solo. His book tells all of these stories in an amazingly vivid and evocative style. Billy is a superb writer and I’d recommend the book for any fan of rebel music and personal creative evolution. Billy puts on an unbelievably energetic and charismatic live show, so check him out on tour if you have the chance. Oh, Steve Stevens, Billy’s guitarist and long-time collaborator is an absolute shredder. They shouldn’t be missed.” -Shepard Fairey

We regret to announce that the first two shows of Billy’s North American tour, in New Orleans on Wednesday, January 21 and in Atlanta on Thursday, January 22, will be postponed. Billy is unfortunately suffering from a pesky chest infection and is on doctor’s orders to recover for a few days before hitting the stage again.

“I’m really disappointed to be missing everyone this week in the Big Easy and Atlanta. I was excited for these gigs but want to make sure I can give you the full on Idol rock show you deserve. Thank you for understanding while I get over this bug. We’ll be back later this year!” – Billy

All other shows on the tour, beginning at the Tower Theatre in Philadelphia (Upper Darby), PA on January 24, will go on as planned. Fans with tickets to the New Orleans, LA and Atlanta, GA shows should hold on to their tickets until information about the rescheduled dates becomes available in the near future. 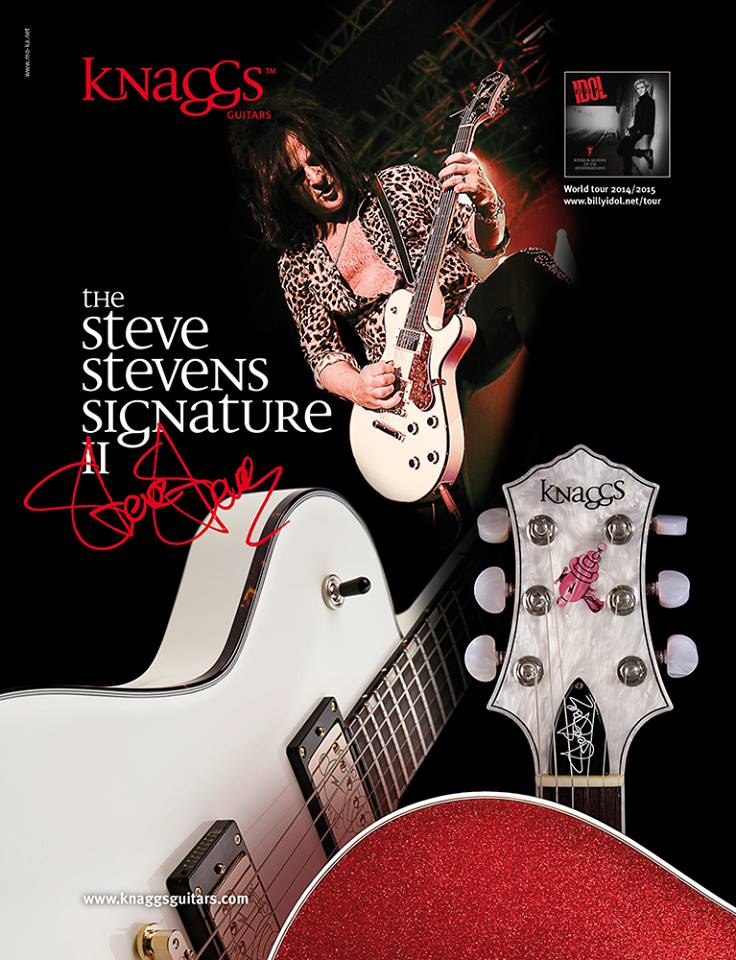 Limited to only 100 instruments in 3 available colors (Red Sparkle, Cream and Black) the SS2 features a Mahogany body with

The North American leg of Billy Idol’s “Kings & Queens of the Underground” Tour kicks off on January 21 in New Orleans, LA! Tickets for many shows are sold-out so don’t delay in securing your tickets now! Confirmed dates listed below and ticketing info. is available on the tour page.

A selection of officially licensed Billy Idol tshirts and apparel is now available! A complete web store will be online soon with additional selections and merchandise.

BILLY IDOL will kick off the new year with a performance at the 2015 Bridgestone NHL Winter Classic®–the New Year’s Day outdoor game between the Chicago Blackhawks® and the Washington Capitals®–at Nationals Park in Washington, D.C. which will be televised live at 1:00 p.m. ET on NBC (along with CBC and TVA). This performance will come as IDOL prepares for his 2015 tour in support of his critically acclaimed 2014 album KINGS & QUEENS OF THE UNDERGROUND which features the anthemic lead single “Can’t Break Me Down” and its evocative video.

Steve Stevens graces the cover of the latest (January, 2015) issue of Guitar Plater Magazine with the feature story “How Punk, Electronica and an Adventurous Spirit Forged the Billy Idol Sound”. Available on newstands now and for purchase online here.

From GuitarPlayer.com:
“In the January 2015 issue of Guitar Player, Billy Idol’s sonic superhero Steve Stevens discusses the gear, tones, chops and attitude that go into everything he does, including the latest record. Plus Idol himself talks about his longtime 6-string foil and his creative process.” 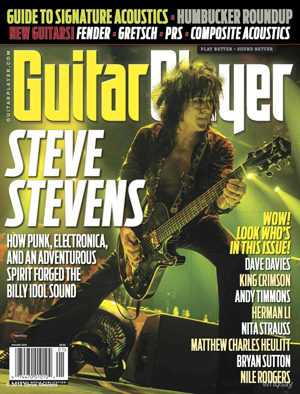 Billy Idol’s self-penned New York Times bestselling autobiography Dancing With Myself was selected as #5 on Rolling Stone’s “10 Best Music Books of 2014.” (Actually, #1 of all self-penned autobiographies if we’re keeping track).

“In 2014, the rock star tell-all autobiography train rolled on with Jimmy Page, Joe Perry, Carlos Santana, Mick Fleetwood, George Clinton, Paul Stanley and Billy Idol among others all getting their turn. But some of the years best books were the

Billy Idol and his band will play Download Festival 2015 this summer at Donington Park, UK on Sunday 14 June! The festival runs June 12-14.

Billy Idol is scheduled to perform at HELLFEST in Clisson, France on June 19, 2015!

The vinyl edition of Billy Idol’s new album Kings & Queens of the Underground is almost here!

Already released digitally and on CD, Idol’s latest record has now been pressed at Pallas in Germany on 2-LPs and will ship to most territories before Christmas.

Each copy of the vinyl edition includes Kings & Queens of the Underground on 2-LPs in a double gatefold jacket, album lyrics and access to 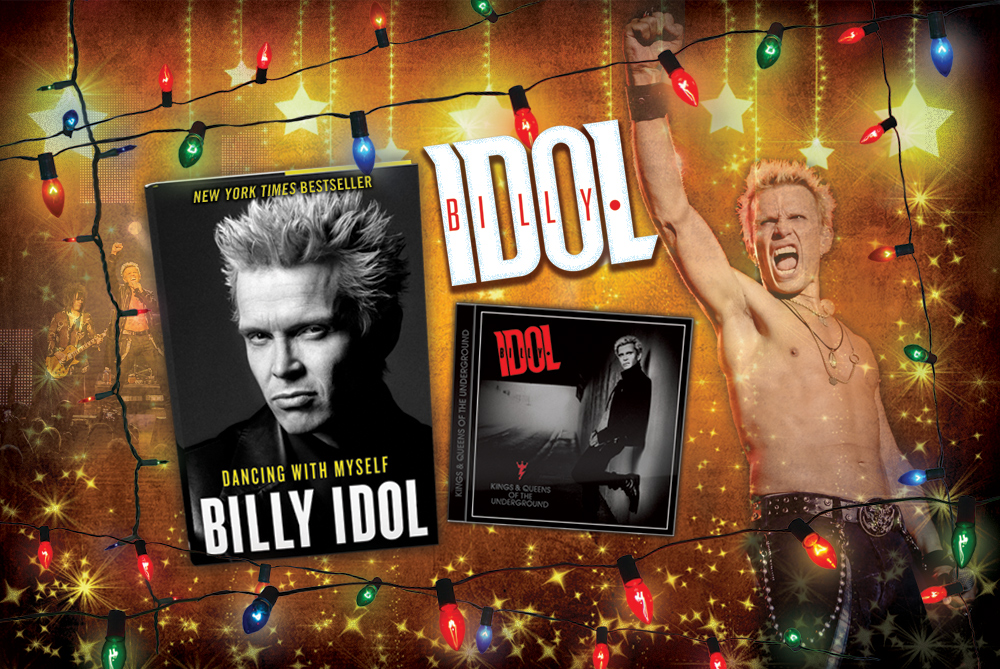 Give the gift of “IDOL” this holiday season to yourself or a friend! Choose Billy’s New York Times Bestselling autobiography Dancing With Myself, his acclaimed new

The UK/EURO tour is roaring to a close with only a few gigs left in the present leg. It’s been great playing both the old and new songs which you seem to be really enjoying, singing along to the new songs as well as old. That is great for us as we put a lot of work into the new album and are

See More›
Posted in: SHIT FROM THE LIP

Each instrument comes with an exclusive 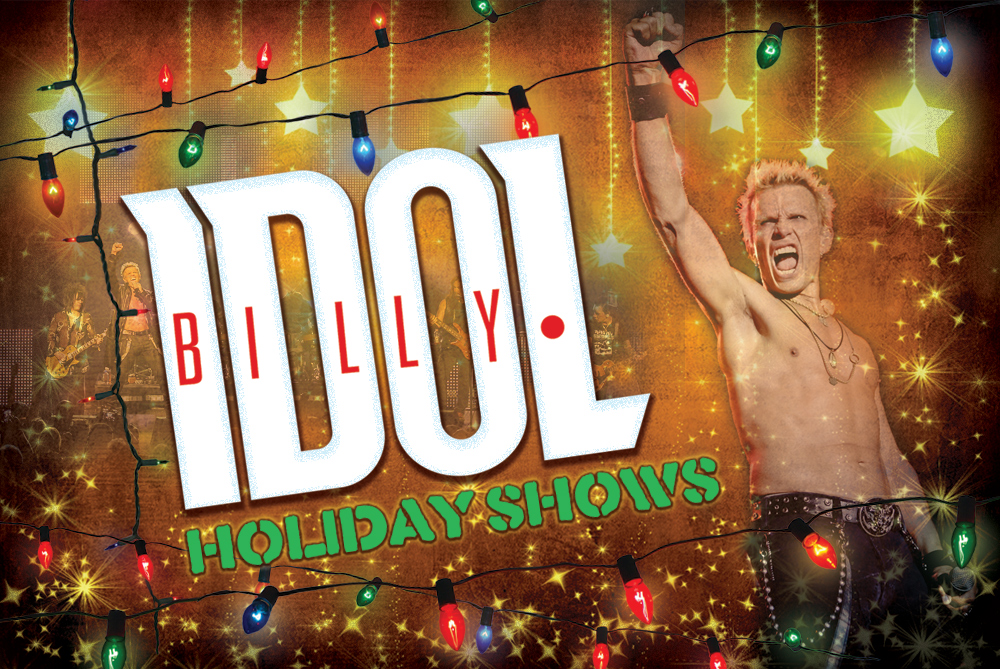 Billy Idol and his band will be playing several special radio station holiday shows in December. Ticketing information can be

Billy Idol’s Fall European Tour kicked off last night at O2 Academy in Birmingham, UK and saw the live debut of tracks from the album Kings & Queens of the Underground. The tour resumes on Friday, November 7 in Dublin, Ireland with dates running through

The album — his 11th chart hit — was released on Idol’s own imprint (BFI) through Kobalt Label Services, and is the

In the fifth episode of this exclusive web series, Billy Idol walks you through his early musical history in London with the bands Generation X and Chelsea. Watch the

Billy Idol, Steve Stevens and the band were the featured performers on Jimmy Kimmel Live on Monday, October 27! Check out the

In this brand new video, Billy Idol discusses the DIY roots of the punk rock movement, the early days of MTV, and why writing his New York Times bestselling autobiography, Dancing With Myself, was more exhilarating than taking drugs. You can watch the

WORLD PREMIER VIDEO FOR CAN’T BREAK ME DOWN!

Check out the worldwide premiere of the new video for Can’t Break Me Down for Billy Idol’s new album Kings & Queens of the Underground! You can watch the

DANCING WITH MYSELF SWEEPSTAKES WINNERS

The winners have been announced for the Dancing With Myself book sweepstakes! The winners below should be looking out for an email from a representative from Billy’s publisher Simon & Schuster (Touchstone) with further 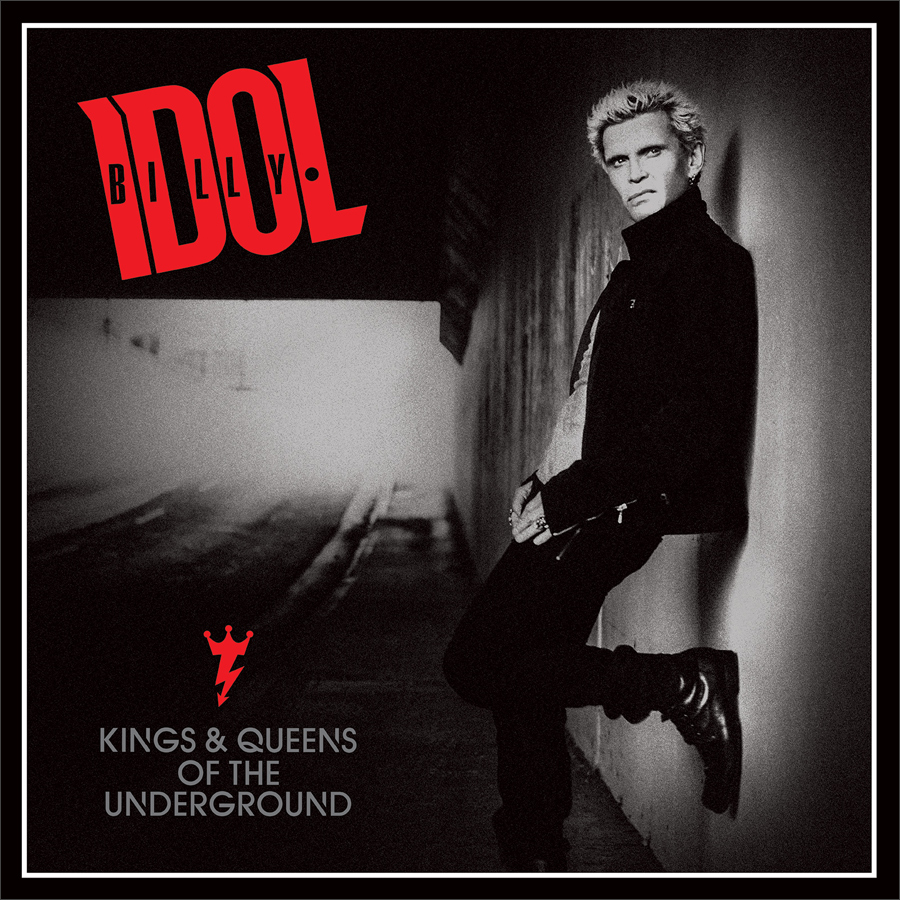 Buy the new album Kings & Queens of the Underground on iTunes and receive the extra track HOLLYWOOD PROMISES.
BUY ON ITUNES
BUY ON AMAZON
BUY ON GOOGLE PLAY
BUY ON BESTBUY.COM
BUY ON WALMART.COM

BILLY IDOL ON ‘THE TALK’ ON CBS

Billy Idol joined Sharon Osbourne and the cast of The Talk on CBS on Monday, October 20. You can watch

Dancing With Myself by Billy Idol is officially a New York Times Bestseller! Dancing With Myself is a survivor’s story at its heart, but also an enchanting, sometimes chilling, and always riveting account of one man’s creative drive joining forces with unbridled human desire, this startling memoir is unmistakably literary in its character and

The original punk turned global superstar will perform indoor shows and ‘A Day On The Green’ winery events in March and April 2015. All shows feature

Billy Idol and Steve Stevens performed a searing acoustic set for a sell-out crowd in New York City to kick off the 2014 CBGB Music & Film Fest. The unplugged set featured “White Wedding”, “Kiss Me Deadly”, “Eyes Without A Face” and “Rebel Yell”. Prior to the performance Billy was interviewed on stage by Timothy Sommer about

Billy recently sat down with Jocelyn McClurg at USA Today to discuss his new autobiography, album and more. Watch two video segments and

Billy Idol and Steven Stevens appeared on NBC’s Today Show on October 7! Billy was interviewed about his just-released autobiography, Dancing With Myself followed by an acoustic performance of White Wedding by Billy and Steve. You can watch

DANCING WITH MYSELF IS RELEASED!

Billy Idol’s long-awaited autobiography Dancing With Myself is released today!

An early architect of punk rock’s sound, style, and fury, whose lip-curling sneer and fist-pumping persona vaulted him into pop’s mainstream as one of MTV’s first megastars, Billy Idol remains to this day a true rock ’n’ roll icon.

Now, in his long-awaited autobiography, Dancing With Myself, he delivers an electric, searingly honest account of his journey to fame—from his early days as frontman of the pioneering UK punk band Generation X to the decadent life atop the dance-rock kingdom he led—all rendered with the in-your-face attitude and fire his fans have embraced for decades. Beyond adding his uniquely qualified perspective to the evolution of rock and culture, Idol is a brash, lively chronicler of his own career.

Featuring sixteen pages of behind-the-scenes photos, Dancing With Myself is a survivor’s story at its heart, but also an enchanting, sometimes chilling, and always riveting account of

Billy Idol recently joined Jim Kerr on New York’s Q104.3 to talk about his autobiography Dancing With Myself and his new album KIngs & Queens of the Underground Watch the interview segment featuring Billy

Steve Stevens talk to Premier Guitar about his work on the new Billy Idol album, Kings & Queens of the Underground, developing his signature style and tons more.

Premier Guitar: How’d you go from playing on the beach and in garages to working with Billy Idol?
Steve Stevens: By the early 1980s, I was living in New York City and playing in a band called the Fine Malibus. Bill Aucoin, who was also Kiss’ manager, managed us. But things weren’t really happening for us. So at one point I got a call to go to a meeting with Billy Idol, who was ready to put something together in the United States. At that time I hadn’t met any real rock stars, and it was exciting to be

Time.com is offering readers this exclusive preview of the prologue from Billy’s autobiography, Dancing With Myself:

They say if you hear the bang, you’re still alive

By the morning of February 6, 1990, I’d been living on a fine edge for more than a decade, always courting disaster to experience the biggest high. I’d been living the deranged life. I felt so nihilistic, yet why hadn’t I just tuned in and dropped…